The Utah Department of Health has announced companies awarded medical cannabis pharmacy licenses and a company listed with a Vernal location is among them. According to their January 3rd announcement, the companies have been selected from more than 130 applications submitted through a competitive bidding process and have locations in Logan, Ogden, West Bountiful, Salt Lake City, Springville, Lindon, Provo, Park City, Cedar City, St. George, and one in Vernal to be called Pure UT. The Vernal Towne Center Facebook page confirmed on Saturday that the Vernal medical cannabis pharmacy will be located in their center. Only 14 total licenses were awarded in the state, 8 of which may open up as early as this March and 6 as early as this July. “The evaluation committee spent hundreds of hours evaluating applications from companies seeking a limited number of licenses,” shares Richard Oborn of the Utah Department of Health. “It was a highly competitive process and some qualified applicants will be left disappointed, but that is the nature of a highly competitive process. The Utah Department of Health is committed to ensuring patients have safe and reliable access to medical cannabis and we are confident the companies selected are best prepared to meet the needs of Utah patients and provide the best value to Utah communities.” The limited number of licenses were divided among four geographic regions in an effort to offer statewide access. Several companies were issued two licenses in order for them to have two locations. Licensees will have to pay an annual fee of between $50,000 dollars to $69,500 dollars, depending on their type of license and the physical location of the pharmacy. For more information, visit medicalcannabis.utah.gov. 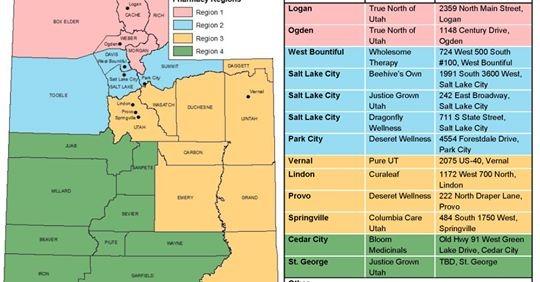