REVIEW: Even With A Busy Holiday Schedule 'Plaid Tidings' at Vernal Theatre: LIVE Is a Must See; Don't Miss It!

The week before Christmas, it takes a lot to get on my schedule. Between last-minute gift purchases, school programs, and addressing all the cards, any solicitation to ditch the to-do list must be absolutely worth it. Plaid Tidings is just one such excuse. If there are gifts still to wrap, go see it. If there are cookies to decorate, go see it. If you haven’t seen the original, Forever Plaid, go see it. They’ll catch you up.

Like its predecessor, Plaid Tidings opens by recapping the untimely demise of the men’s quartet The Plaids via bus collision while in transit to their first big performance. Knowing the premise for the show, I wondered if this sad fact would cast a pallor over what was billed as a light-hearted, Christmasy performance. But the buoyancy of pals Jinx (Mike Sorenson), Franky (Justin Benson), Sparky (Daniel Jackson), and Smudge (Jon Stearmer) immediately put me at ease. The singers have the extraordinary ability not only to return to earth post-mortem surprisingly intact (as they did once before in Forever Plaid), but they can break the fourth wall. They find the audience no kinder, no smarter than their previous visit, only “older.” In turn, we find them no less talented and no less hilarious.

As incredulous as it seems, I quickly accepted the supernatural narrative but found it harder to swallow that such a talented ensemble died in anonymity. There was no weakest link amongst their vocals, which melded beautifully into one harmony after another. Benson, Jackson, and Stearmer have returned for their encore after Forever Plaid, while newcomer Sorenson (replacing Joel Benedicto) performs so synchronously that I would never suspect that he is not also a veteran.

After having once been allowed to return for the show they never performed, the men are baffled at the purpose of yet another terrestrial sojourn. What unfinished business remains? Here I must note the true history behind the writing of Plaid Tidings. Author Stuart Ross considered—and rejected—a holiday sequel to the 1989 Forever Plaid for years. It was not until September 11, 2001, that Ross saw clearly how the cheerful tones of four men un-ironically dressed in gold-trim plaid would bring needed levity to a heartbroken country. He immediately resurrected The Plaids, yet again, to do what they do so well.

What then is the purpose for the return of Jinx, Franky, Sparky, and Smudge, within the context of the story? It is the same. At first they entertain us with a whirlwind of summarizing the dozens of songs performed in Forever Plaid (“Moments to Remember”). But it soon becomes apparent that something has short-circuited in the paranormal bridge that has allowed this aberration. Whatever song they attempt, Christmas carols quickly override. If you thought they covered a lot of songs in the first one, you ain’t seen nothin’ yet. In their “Mad Christmas Carole Canon” they blast through so many classics, I wondered if there would be anything left for a second act or if I would soon be back to my Christmas cards. My fears were vain. They declared “Once we start we cannot stop or we’ll be doomed for eternity!” They. Did. Not. Stop. “Possessed by the Christmas Spirit,” The Plaids discover that their mission is simply to inject some Christmas cheer into the disheartened.

Frenetic yet brilliantly choreographed, the remainder of the show bears a buffet of yuletide listening. Do you crave an Italian Christmas, or a Hawaiian one? Irish or Jamaican? Jewish? There’s something for you too. Perhaps you’d like something a little spicier (“Besame Mucho”), or you’d like to hear some vindication for the short-shrifted Rudolph and Frosty (“Rudolph the Red-Nosed Reindeer”). Do you like to sing? Feel free to join in for “Matilda.” Get yourself an aisle seat and you might even be invited on stage. In case the Plaids have not yet covered all the bases, the show climaxes in a re-creation of The Ed Sullivan Show. Up to this point the set and props remained relatively spartan, but this one sequence put me in awe of the props coordinators (Kathryn Peacock and McKenna Christiansen). The stage becomes a virtual revolving display of Rockettes, “animal” stunts, The Vienna Boys Choir, and Brunnhilda the Viking, among many others.

Choreographers Danni and Aurie Harrison have worked magic. The quartet will by turns move as one, then bumble and stumble in hilarious ways. I held my breath throughout the show as all four steered their mic stands and cords around one another, never concussing their neighbor or entangling themselves—except on purpose. (All for effect of course, as the cast all have wireless mics.)

All 35 musical numbers are carried by the flawless musical combo of bassist McKenzi Bigler and pianists Karilynne Pearson and Nashelle Jackson, on alternating nights. (Well, except when the pianist requires a “union break” and Sparky reveals himself an instrumentalist for “Let it Snow.”) Regardless of who is onstage or what role they play, the musicality flows effortlessly. That such talent resides in our tiny town is yet another feat of possibly supernatural origin.

See Plaid Tidings for remaining performances December 20th-21st at 7:00 pm, or catch a matinee Saturday the 21st at 2:00 pm. Bring your children, ditch the wrapping, and allow The Plaids to share their holiday cheer! For tickets and more information visit www.vernaltheatre.com. 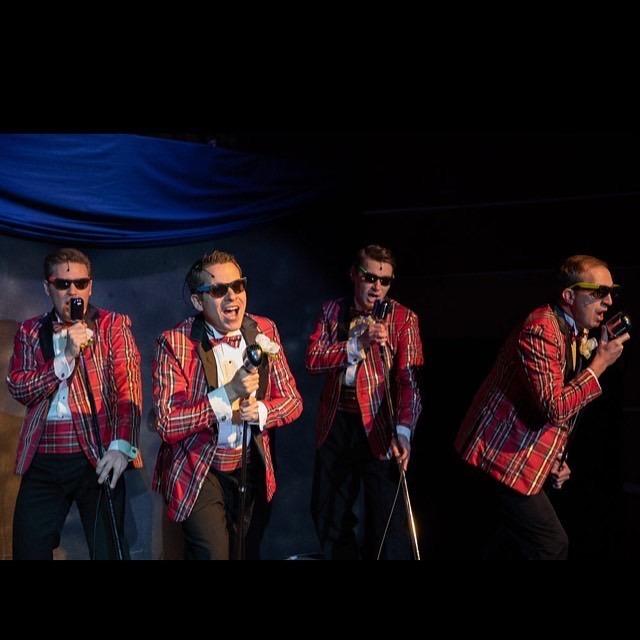