Let's talk for a minute about pre-emergent herbicides. . . 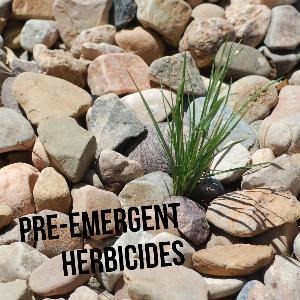 A pre-emergent weed killer doesn’t kill weeds that are already growing, it prevents them from ever coming up. A pre-emergent will give you weed free flower beds all season. And, volunteer plants, seeded from last year’s garden, won’t be coming up where you don’t want them. Hi-Yield’s Turf and Ornamental Weed & Grass Stopper is an excellent pre-emergent that will give great control over broadleaf weeds as well as grass. Weed and grass seeds won’t sprout where you have used Turf and Ornamental. The best time to use a pre-emergent is in the early spring before you actually see any signs of weed seed germination; however, pre-emergents can be used at any time during the season, as long as weed seeds are still germinating. If you are treating a flower bed that hasn‘t been planted yet, remove old plant debris from the bed and add compost or whatever else is needed to improve the soil. Then set out your plants. Give them a week or so to get rooted in, then apply the pre-emergent and water it in. This creates a chemical barrier that kills a sprouting seed. If you disturb the soil, though, it will damage that chemical barrier, and you‘ll have to re-apply. Now enjoy a season free from weeds! If you want to treat a bed in which you have already planted flowers or vegetables

, wait until the plants are up and past the seedling stage before using the pre-emergent. If you already have weeds growing in a bed, remove the weeds first and then sprinkle or spray the pre-emergent over the raked and smoothed soil surface, according to the directions on the label, and water it in. If it’s later in the season, and you have an area along a driveway or fence that is full of weeds, use Scotts Season Long or Bayer’s Durazone on the actively growing weeds when the temperatures are above 80 degrees. The existing weeds will die, and new weeds will not germinate, leaving these areas weed-free for up to six months. Granulated pre-emergents, such Turf and Ornamental, last for about three months. The liquid pre-emergent can last for six months. As with any chemical, be sure to accurately follow label directions and precautions for best results.