Let's talk for a minute about dividing perennials. . 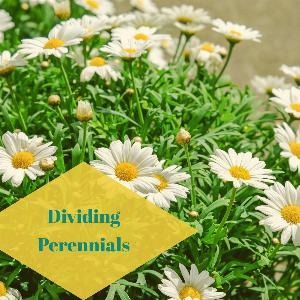 Many perennials look their best only when regularly divided. Most divisions establish themselves quickly and bloom that same season, or the following one. Division of perennials should be done while they are dormant, meaning in the late fall or early spring. It can also be done after their blooming period is over, but this is much more chancy. Water anything you plan to divide several hours ahead of time if the ground is dry, and also prepare the ground where the divisions will be planted before you begin work on the perennials themselves, adding compost or peat moss and working the soil well. The simplest way to divide a healthy perennial is to slice off a chunk from the side of the clump with a sharp knife or spade, leaving the main part undisturbed in the ground. Or, you may lift the parent plant out of the ground entirely if you want many divisions or if the plant looks poorly in the center. Try to damage the roots as little as possible. If you lift the entire plant out, carefully shake and rinse the soil off the roots until you can clearly see where the roots meet the stem. Cut out and throw away any old, woody tissue or where there is insect damage. Separate the plant into smaller clumps, gently teasing apart the roots, or if necessary, cutting them into sections with a sharp knife. If the roots are matted, thin them out a little bit to stimulate strong new growth. If you are dividing in late summer or fall, prune the stems and leaves back to about half. This gives the roots less plant to nourish while they try to establish themselves, and also reduces water loss in the plant. Set the new divisions into the prepared holes and spread the roots out. Position the crown of the plant, which is where the green leaves begin to emerge, at ground level, not below, or it will smother. Cover the roots with soil and press down firmly to prevent air pockets and to give the roots good contact with the soil. Keep the soil moist as they become established. Mulching around them will help keep the moisture in and will give them extra protection that first winter.