A Zillion Delightful Absurdities in The Foreigner at Vernal Theatre: Live

Everything—or everyone—is not as they seem at the outset of Larry Shue’s comedy, The Foreigner. The 1984 production may benefit from its status as a lesser-known play, with lots of surprises for theater-goers unfamiliar with the story. The rural setting of a homey lakeside fishing lodge will feel relatable to many Vernalites. Wood paneling, leather couches, and hunting trophies recall the antiquated feel of many a childhood family vacation. The small cast of seven quickly becomes intimate, and the chatty innkeeper will put you right at ease. It might almost feel like you’ve seen this before. You haven’t.

When Sergeant Froggy
Lesueur (Spencer Johnson) enters with his nervous, pensive companion Charlie
Baker (Aaron Wood), I didn’t expect much from the latter. Froggy monologued for
a good five minutes before his awkward companion relieved me of the suspicion
that he was mute. It is immediately apparent from Froggy’s accent that he is
not native to this Georgian backwater, but is a British officer on one of his regular
trips to demonstrate explosives to American soldiers. He has brought along his
mopey friend Charlie, who is somehow quite sad to leave his dying wife, despite
her long career of infidelity. When Charlie does at last find his voice, he
laments that his darling Mary finds him very dull because he lacks a
personality.

Froggy is the only friend
to whom Charlie can bring himself to speak without immense anxiety, which is
highly inconvenient as Froggy will soon leave for a few days to perform
military duties. Accordingly, Froggy contrives to tell the innkeeper that
Charlie is “as foreign as the day is long,” and thus understands no English.
This fortuitous fib will ultimately bring everyone’s secrets to the light of
day, and even unearth Charlie’s lifelong latent personality.

The prospect of having a
bonafide foreigner in her care sends innkeeper Betty Meeks (Mohea Sprouse) into
a tizzy. (The joke here being that Charlie, even as a Brit, is still a
foreigner.) The un-traveled, adorably naive Betty longs to meet “A-rabs and
Greeks,” but for now is sated in her association with one so exotic that his
nationality and native tongue remain a mystery. Betty’s simple, open manner
made me smile throughout, while ultimately surprising me with her gumption.

When the quarreling couple
Reverend David Lee (T.C. George) and Catherine Simms (Laura Chynoweth) arrived
on scene, I wondered how such a mismatched couple came to be engaged. David is
genial and caring; his fiancee is displeased and snappish. It seems impossible
to like her and she doesn’t mind admitting it, “Some people are just meant to
be a waste of food, and I think I’m one of ‘em.” It seems equally improbable
that anyone could dislike the diligent reverend. Again, I was surprised.

The county property
inspector, Owen Musser (Karson Bentley) is perhaps the most unfluctuating
character throughout. The audience quickly learns that Owen is a nasty man, and
it is clear that Bentley relishes the opportunity to play the villain. It
remains to be seen how long his fellows must suffer before his vileness is laid
bare, though even the theater-goer does not yet know the true extent of his
corruption.

When Ellard Simms (Koy
Nielson) first bumbled onstage, I had even less hope for him than I did
Charlie. We know already from his sister Catherine that he is slow-witted and
not expected to accomplish much. It is then the greatest delight to see him
connect with Charlie as no one has, begin to “teach” him English, and
ultimately lead Charlie to his life’s goal. Nielson plays the role deftly:
Ellard is funny, lovable, capable, and most importantly, believable. His
tête-à-têtes with Charlie were the highlight of the show.

Aaron Wood’s Charlie—or
“Chay-o-li”, as he is supposedly called in his native land—is tasked with
convincing us that caterpillars really can become butterflies. It is no small
feat. After all the other characters have laid themselves bare to his supposed
incomprehension, it seems likely that his lips are sealed forever. This
introvert wants nothing more than to go home and never tell a soul. But some
mischief inside him awakens with a roar, and he soon has the audience roaring
alongside him (in laughter), as he performs a variety of impish hijinks. His
private declaration to Froggy, “I think I’m acquiring a personality!” is by
then an understatement.

As a farce, The Foreigner‘s jokes ride on physical
comedy, improbable situations, and impeccable timing. To accomplish the
remarkable without becoming ludicrous points to the skill of director McKenzie
Johnstun. “The situational comedy that it is, there are so many things that
happen without actual language. It’s physically funny!” said Johnstun. She
points out that even very young audiences will be captivated by the cast’s
shenanigans.

You can see The Foreigner this Friday and Saturday,
November 1st and 2nd at 7:00. For tickets and more information visit
www.vernaltheatre.com. 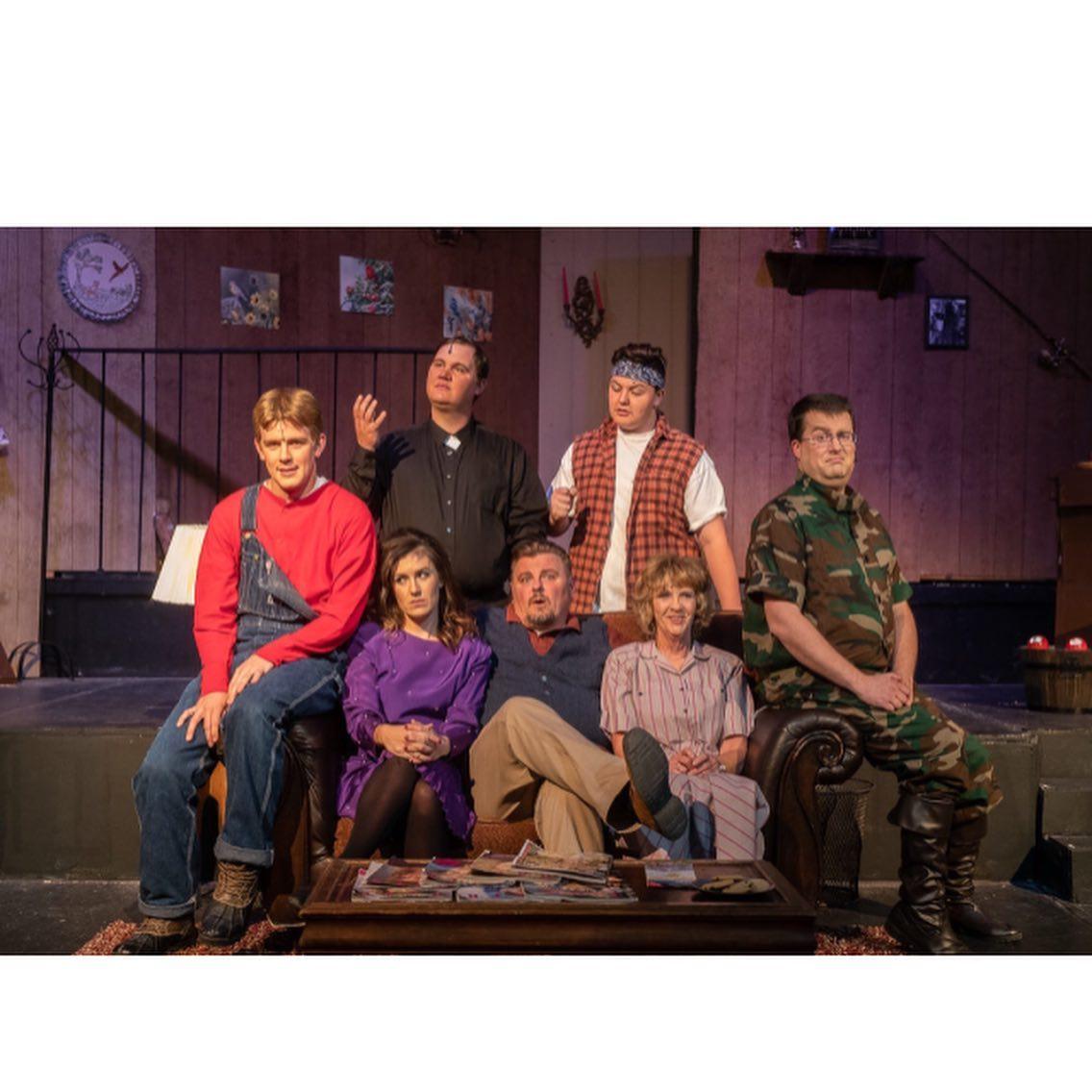 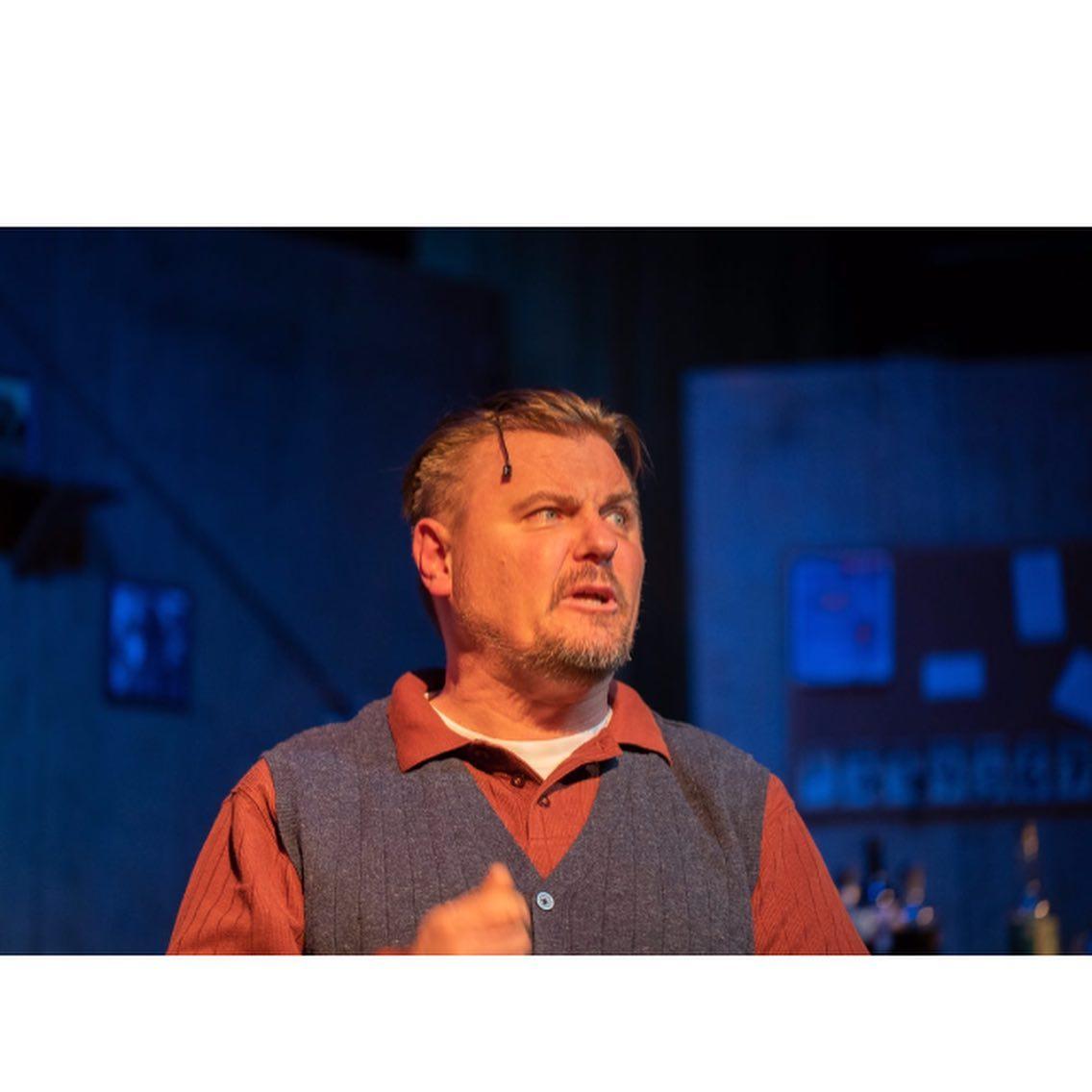 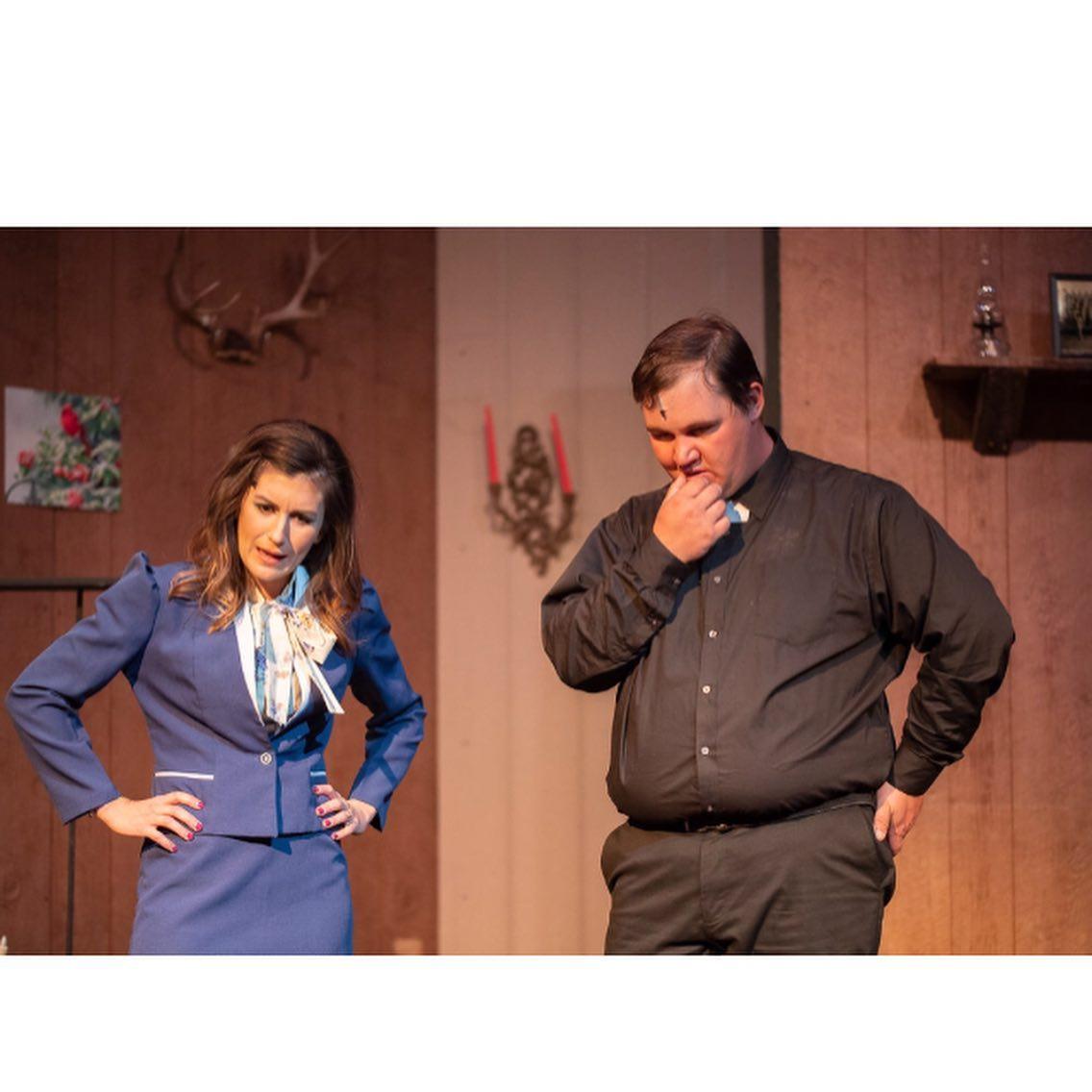 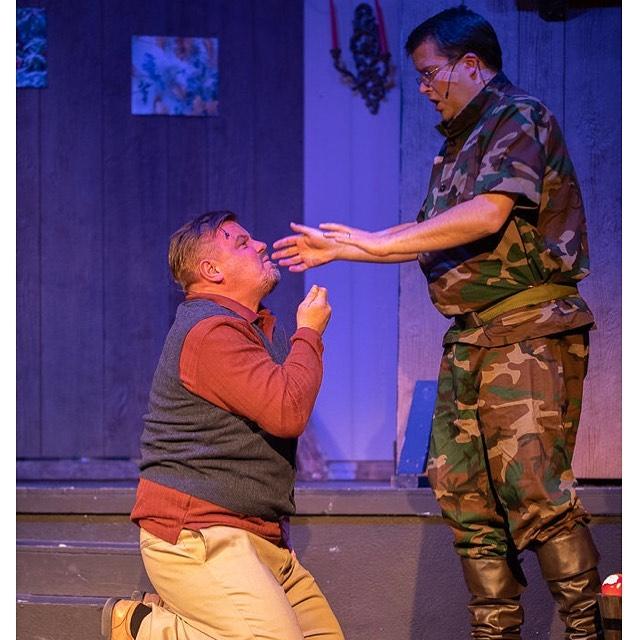 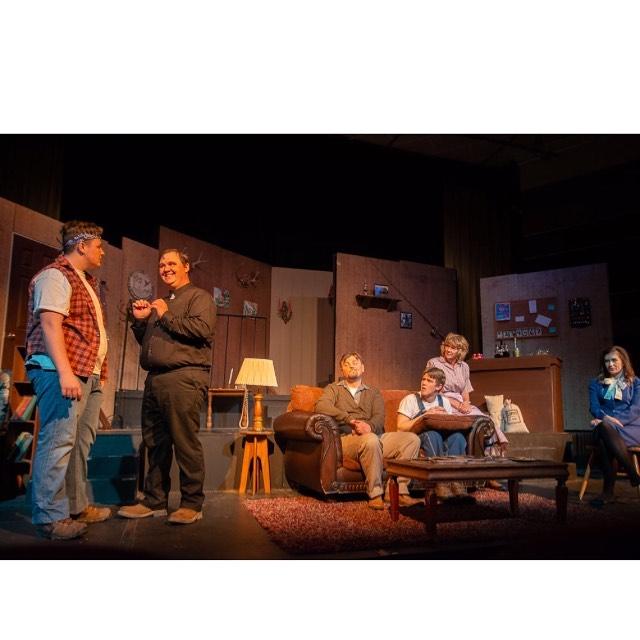 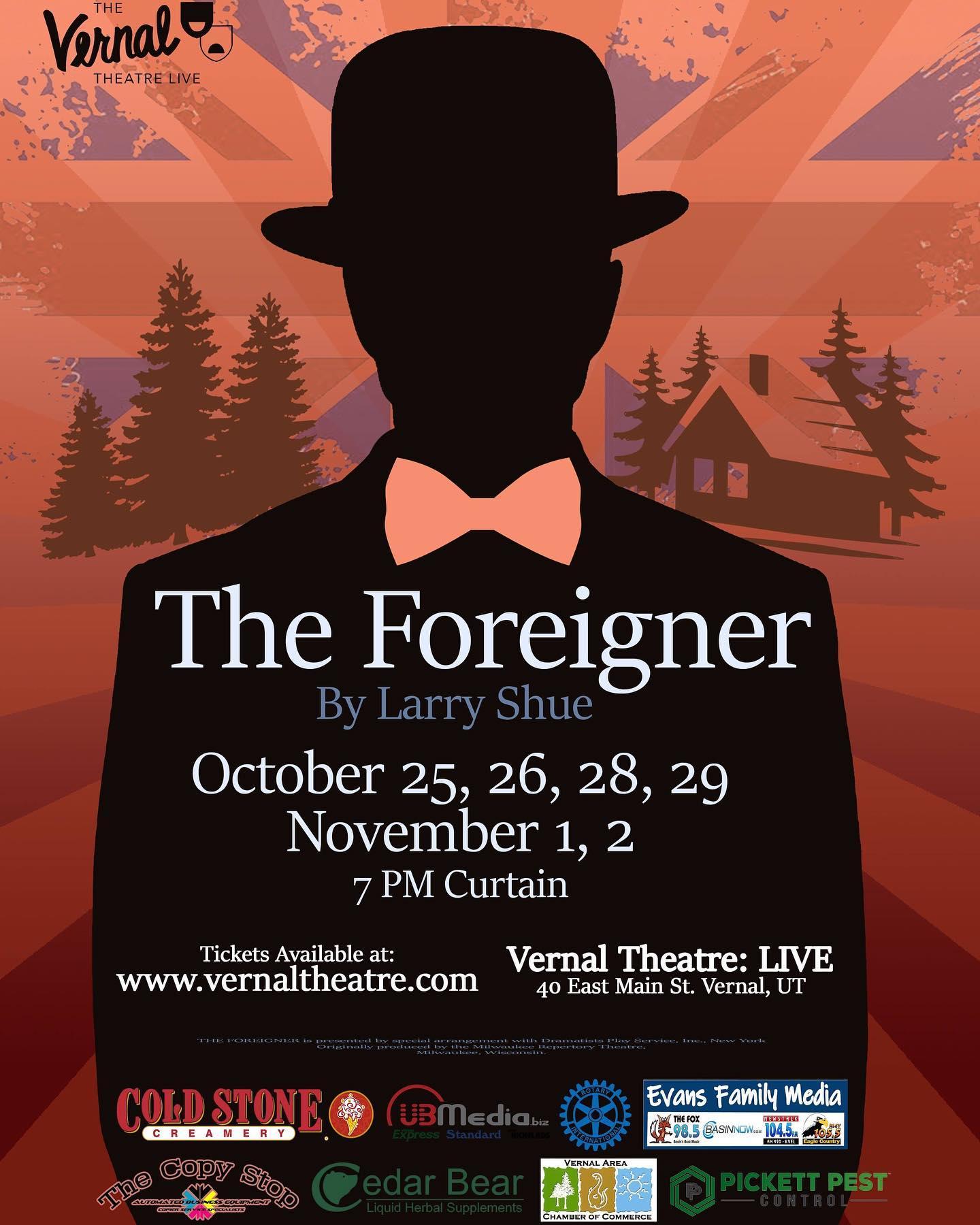